I love Morocco. I love the people, the countryside, the weather, the diversity, the culture, the history (I may be over the cuisine a bit – too many tagines!!) and I love the colour.

But it is a third world country that takes some getting used to and it requires a positive attitude whilst you are travelling in it. Enjoy the beauty and the splendour and remember these 15 tips I have come up with to help with your journey.

Here are my basic tips:

1/. Haggling and selling for Moroccans is  their national sport and haggling is an integral part of their culture.
Do not buy a rug from a carpet seller! It will be the old routine where you are trapped with mint tea hospitality, a thousand rugs are rolled out infront of you and you’re only given evasive answers when you ask the price of each or any. You will be there for ever and you will still pay $100’s of if not over $1,000 per rug/carpet. Avoid it by just not going in. These rugs and carpets are not cheap.

This goes for whatever you are thinking of buying. You need to pay about 25% of the price they ask you for. In my opinion, if you do not crave something then don’t bother trying to buy it as the haggling process is exhausting. And they will always be better than you at it!

WHEN YOU FIRST ARRIVE make sure you have a cheat sheet with exchange rate conversions of Dirhams to your currency so that you do not get ripped off.
For example 700 dirhams is just over 70 USD. Knock off a ZERO to get an estimate of price if you are an American.
For Australia a rule of thumb is divide by 7. (So 700 dirhams is about 100 AUD.)

2/. Cab drivers: always find out from someone the going rate for a cab before you get in one. For example it costs 70 dirhams (about $7 USD) to go from Marrakech to the airport. Insist on only paying that or move on to the next driver. Never just get in a cab without deciding the price in advance.

Most cab rides within a city are less than or around 20-30 DH. So always firmly set a price before the ride.

3/. Viagra in bottles. It’s not. It’s a tourist attraction.

4/. Men versus Women
Polygamy is still legal in Morocco though very rare. In 2004 rules came in making it very diffcult to marry more than one woman though some of the older generation who married before 2004 are supporting 2 or more wives still – or their offspring are.
Muslim men in many arab countries sadly see women as second-class citizens.
If you are travelling solo you may come across various manifestations of this attitude. Cover up as much as the heat permits to avoid some of the leers and the goading from men.
But remember:  men often believe they are superior so keep yourself modest and don’t get too bolshie with them. It could backfire badly. 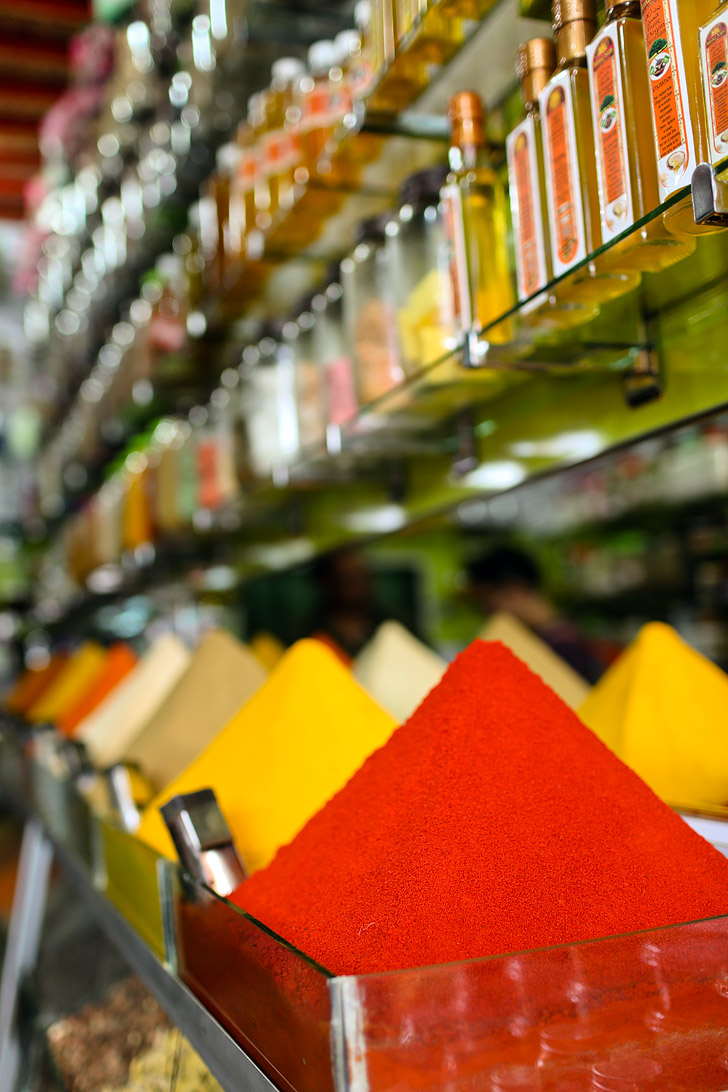 5/. Local guides. Common experience is that they can be often lazy, often spend their time on the phone and have no idea how to stimulate and interest a foreigner. If they are male they may even be loathe to communicate much with the women in a group. Not all guides of course, but just be aware that though they are “official guides” they often have no idea how to really guide well and considerately.

It’s definitely great to hire a local guide to help you get an inside perspective on the country and navigate through the maze of the medinas (old towns), but be sure you know what you’re getting yourself into. The local guides have built relationships with many different stores, and they are most likely getting a cut of the sales. Don’t be fooled when they say they are trying to help you haggle to get the best price.

If you meet locals who are not official guides wanting to offer to guide you around or give you directions then tell them upfront you will pay them 20 dirhams to show you how to get to somewhere and no more. They are like the carpet sellers – out to make a buck.

6/. Holy Days and Weeks
Fridays are a holy day and things can be shut.
Ramadan dates make life very hard to eat for tourists too as restaurants are closed and it is a month long. Always check these dates before you travel.  For 2019 it is 5th May – 4th June – a whole month!

Eid-al-Adha or the “Festival of Sacrifice” is on 11 -15 August in 2019 and it’s when animals are slaughtered and sacrificed in the streets. It honors the willingness of Ibrahim (Abraham) to sacrifice his son as an act of obedience to God’s command. But, before Abraham could sacrifice his son, God provided a lamb to sacrifice instead. In commemoration of this, an animal is sacrificed and divided into three parts: one third of the share is given to the poor and needy; another third is given to relatives.
Nice idea but very messy and revolting to witness.

7/. Drinking the Water. Nope. Don’t do it.
Morocco is literally littered with plastic bottles and refuse which blows around and pollutes the countryside. It is most upsetting to see. But you have to drink from bottled water to keep yourself as safe as you can from water-borne bacteria. Even to brush your teeth. Do not touch the ice either in drinks.

8/. Leading on from this:   you may very well get The Runs. So pack some IMODIUM.

9/. Leading on from this: be careful handling the money. The notes, especially the smaller denominations, are filthy and have been handled by thousands of people some of whom will not have washed their hands! It is an excellent way to get sick so always sanitise after handling money and never put your hands near your face.

10/. Visiting a Mosque is off-limits to non-Muslims

11/.  Most Moroccans are Muslims and so alcohol is not normally served with dinner in cafes or restaurants in Morocco. It costs a bomb when it is served so expect to drink bottled water for your stay in Morocco.Hashish on the other hand is a national blight in Morocco. Male youths smoke it heavily and it is readily available to thos

e seeking it –  but of course it is ruinous for the health and mentality of the males who smoke it and although it is banned smoking and distribution appears not to be strictly policed.

12/. TIPS. See an old man with a cute donkey? If you take his photo you must expect to tip him: eg 10 dirhams for the photo.
Same with snake charmers, water carriers etc.
Remember that most Moroccan women will not want their photo taken at all.

13/. Entrance Fees. Following on from the above I was shocked to see that entry for “foreigners” to see the Roman ruins at Volubilis is now 70 dirhams (more than $10 AUD) per person now. The Moroccans have clocked how to tap into the foreign sightseeing dollar.

15/. Pack earplugs as car horns, motor bikes, barking dogs, kids in narrow streets playing, chickens cackling and the Call to Prayer are sure to keep you awake otherwise!